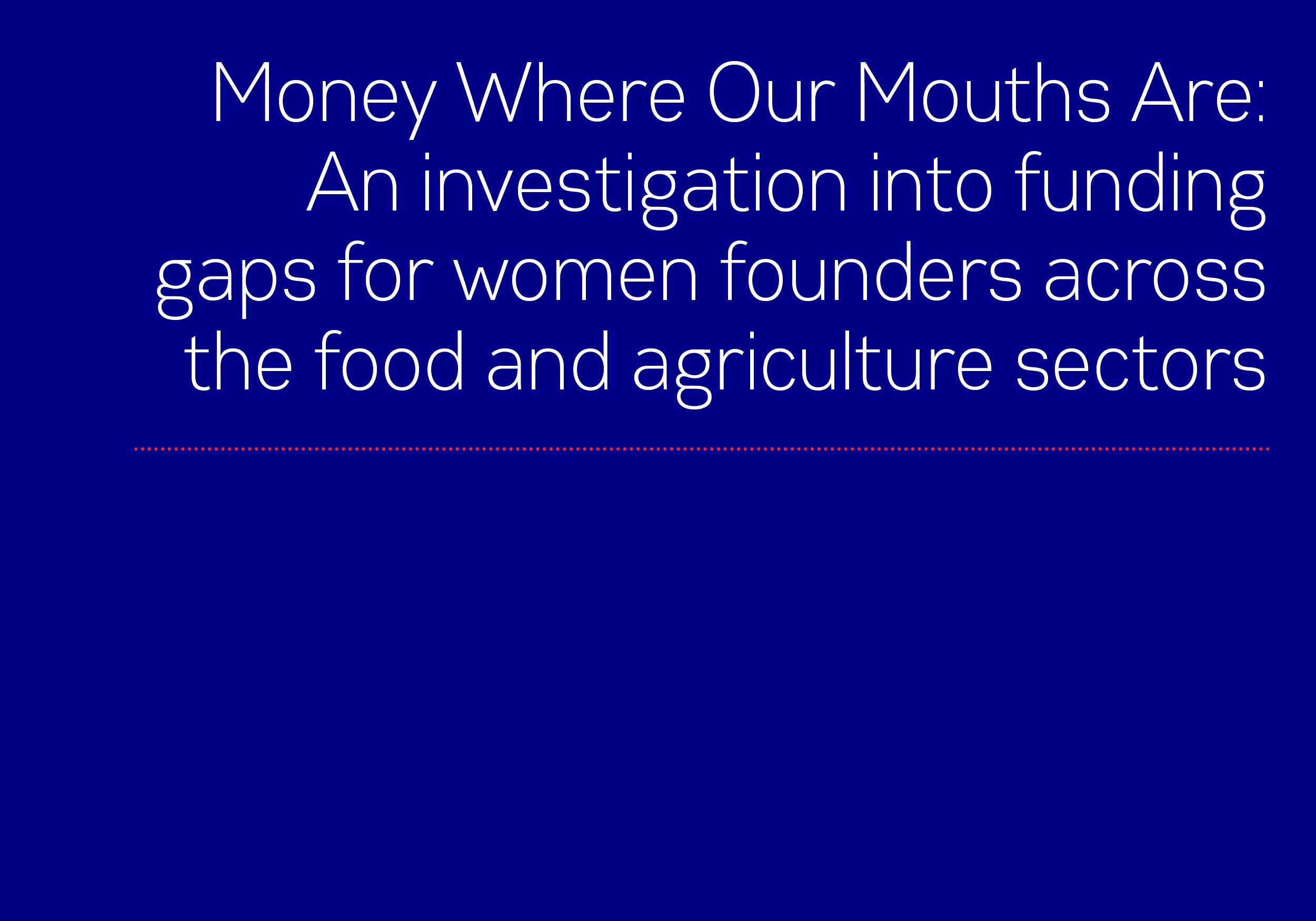 KK&P and collaborators AgFunder and The New Food Economy have launched an investigation into funding gaps for women founders across the agriculture and food sectors. The first-ever database of investments into women-funded agri-food enterprises is being developed and the first article on our initial findings was recently published. More editorial projects will be forthcoming. The partners are exploring the design for a solution that accelerates the flow of capital to women agriculture and food entrepreneurs.

The problem we are looking to solve

Across sectors, women-led businesses grow faster, are better run, and are least funded. In 2017 female founders received just 2% of venture capital dollars—$1.9 billion of the $85 billion total invested across all sectors. 1

To us this represents an enormous lost opportunity. We want to fix that.

The investigation is exploring exactly where the gaps are—both in money flowing to women, and who is making the decisions on the investment side.

What we are doing

We’ll be researching AgFunder’s database of over 5,000 agrifood tech startups to determine the proportion of which are run by women, how successful they are at raising funding, and who the investors are that are backing them.

Female-founded companies are raising less as an overall percentage of all firms as they move through seed, early- and late-stage venture. 2

Stories and experiences will support the data. Interviews with men and women agriculture and food entrepreneurs, venture capitalists, agribusiness and agrifood venture funds, and support organizations will be conducted. We will participate in at least six ag-tech, food-tech, and investment conferences as a speaker, panelist or facilitator, to gather stories and workshop the relevant key themes. These are underway.

Why this is important

Agriculture and food are both generators of as well as solutions for many of the pressing issues of our time—climate, soil fertility, water, health and nutrition, sustainability, and food access and distribution. We need scaled solutions quickly, across all technologies and continents.

Agriculture and food is an important emerging sector; in 2017 foodtech and agtech startups raised over $10 billion collectively, a 30% increase on the year before. 3

“The biggest issue is not the number of women starting companies, but the access to capital as you move up the food chain.” —Susan Lynd, co-founder of BBG Ventures

A 2017 Forbes study shows that women-founded and -managed enterprises are significantly underfunded by comparison to those run by men. Growing start-ups with female founders almost universally outperform their male-only counterparts. The fastest-growing companies, with 200%+ growth, are 75% more likely to have a female founder. 5

A structural bias exists that harms women-led enterprises and the critical agriculture and food issues they are committed to resolving.

By Spring 2019 we will have published articles, produced podcasts which will reach, minimally, the audiences The New Food Economy and AgFunder News. We will produce an industry white paper to attracted influencers in the women-led VC sector, and begun a campaign to raise awareness of the benefits women founders and leaders bring to agriculture and food solutions.

Advisors will be asked to assist with focus and strategy for achieving the project goals, facilitate introductions to funders or interviewees, and review interim outputs.

We seek $150,000 to support this work through Summer 2019. The collaborators are providing an equal match of in-kind time. This includes staff time for research, appearances at conferences, conducting interviews, and publishing stories in AgFunder News and The New Food Economy as the picture and narrative emerge. The funds will also cover project assistant expenses and travel to conferences. An expert in campaign development will be hired to raise public awareness of this issue. We can accept grants and donations. Supporters will be acknowledged on all media platforms and as underwriters of the white paper.

This is a fast-paced effort. We need a research assistant to read, interpret, and summarize financial and other topical studies and articles; and a communications/public relations expert to help craft key messages, identify outlets and methods for interim reporting and to sharpen public speaking skills.

Agree to be interviewed

Or make recommendations and introductions to seed and growth VC firms’ directors (men and women), agriculture and food entrepreneurs, philanthropists and impact investors, bankers, academics (gender studies, entrepreneurship, e.g.), and agriculture and food company executives who manage R&D and external investment activities. A robust list has been developed but there are many more important perspectives to gather.

Karen Karp is a fourth-generation agriculture and food entrepreneur and respected consultant with over 30 years of experience across the agriculture, food, and community health fields. Since founding Karen Karp & Partners (KK&P) in 1990, she has led the organization to become a highly sought-after problem-solver for food-related enterprises, programs and policies. Based in New York City, KK&P works nationally with clients across government, business, and non-profit sectors to plan, execute and evaluate comprehensive agriculture and food system strategies.

Karen has a BFA from Parsons Design (1982) and a master’s degree (2001) from the University of Bath School of Management, earning honors for her thesis, “How Does Food Sustain Us?” KK&P’s clients include the USDA, the New York State Department of Agriculture and Markets, New York City Department of Health, the Initiative for a Competitive Inner City, NYC Economic Development Corporation, The James Beard Foundation, City Harvest, and corporations such as PepsiCo, Monsanto, and Sysco.

AgFunder is an online venture capital platform investing in bold, exceptional entrepreneurs revolutionizing the food and agriculture industries. AgFunderNews is its related free news service for the agrifood tech investment community globally. We offer daily news on recent funding in the sector, new agrifood innovations, the sector’s leading investors, and write about the support on offer for entrepreneurs.

Louisa Burwood-Taylor is Head of Media & Research for AgFunder and chief editor of AgFunder News, bringing over 10 years of financial journalism experience to the team. She has covered a range of financial products and markets during her career, from equity capital markets in Asia to structured bonds in Europe, before turning her attention to agriculture nearly five years ago. She’s also been responsible for launching two publications: an institutional investment intelligence service for the Financial Times and the first-ever title focused on agriculture investment, Agri Investor, for PEI Media. In 2012, women in the U.S. were majority owners of 9.9 million businesses generating $1.4 trillion in sales and employing over 8.4 million individuals. Another 2.5 million businesses were jointly-owned by women and men, accounting for another $1.1 trillion in sales and 6.5 million jobs. Women entrepreneurs generated $453 billion in payroll for 14.9 million workers across over 12.3 million businesses.

The New Food Economy is an award-winning non-profit newsroom using independent, deep, and unbiased reporting to investigate the forces shaping how and what we eat. We are the home of a new kind of food journalism that goes beyond the gustatory to tell the urgent, under-reported stories of a changing system no one can opt out of.

Kate Cox joined The New Food Economy after several years reporting on the American age boom for radio and text as a freelance health reporter. She has written extensively about end-of-life issues, elder incarceration, and the plight of living organ donors. In 2014, she reported and produced The Hidden Crisis, a three-part radio documentary about the nation’s first emergency shelter for victims of elder abuse. Kate has been a contributor to The Nation and Huffington Post and co-created and produced Off the Radar, a travel TV show and blog about two women on a mission to see the world on $1k.

Laura Shulman is the Founder and President of Food Future Strategies, Inc., a food-forward consultancy focused on building break-through brands. Before launching FFS, Laura spent nearly two decades at some of the world’s largest PR firms working with global CPG companies, commodities and associations to develop insight-driven, actionable strategies and creative ideas to generate awareness, elevate relevance and accelerate growth. In her most recent role as an SVP, Partner at FleishmanHillard, she built and ran the Chicago office’s multi-million dollar Food & Nutrition practice from the ground up. Prior to her PR career Laura was a broadcast journalist for 7 years. She earned her BS in journalism from Bowling Green State University

Let’s put our money where our mouths are.

Thank you for your support.