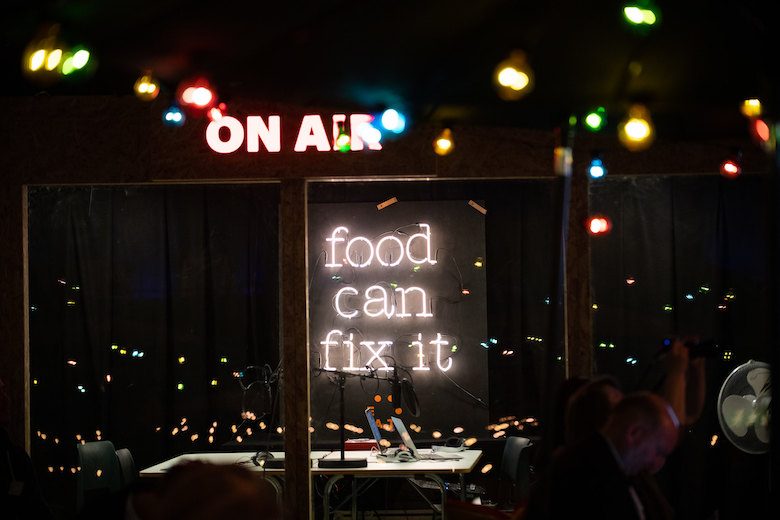 This spring and early summer I attended several food events in Europe. The EAT Forum in Stockholm and Sangue na Guelra Lisbon offered different perspectives from the U.S. food conference circuit and from each other.

EAT Forum: How Would the Conference Address Responses to the Eat-Lancet Commission?

The sixth annual EAT Stockholm Food Forum gathered, as its website describes, “1,000 food system leaders from science, politics, business, civil society and beyond.” There was much anticipation leading up to this year’s event following the January 2019 release of EAT’s “Food in the Anthropocene: the EAT-Lancet Commission on healthy diets from sustainable food systems.”

A year and a half earlier, I had the great fortune to meet and share a weekend with EAT Forum’s founder, Gunhild Stordalen, at a Sunnylands retreat convened by that organization and our clients, The James Beard Foundation. Dr. Stordalen’s reputation as a driving force linking climate, health and sustainability preceded her. We spent a lot of time that weekend discussing the lack of precedent for what would eventually be revealed as the “universal healthy reference diet” –based on a diet plan that was quantitatively constructed that would address human health and be climate-friendly with a bold mantra: Food Can Fix It.

The report came out in January, after which it was debuted around the world. For me, the report had significant limitations on its promise of climate friendly food production, which I wrote about here and I was not alone in that criticism. Thus, as a food professional and a conference planner, I went to Stockholm with great curiosity: How would the range of responses to EAT-Lancet be addressed and dealt with in the programming?

This year’s EAT Forum was a huge, splashy affair that took place in a sports arena, complete with music, dramatic light effects, simultaneous events on multiple stages and zones for doing one’s own work or relaxing or meeting up with people while being able to view the programs on monitors. On the main stage over several days, with one brief exception, the commission’s findings were reinforced with well-rehearsed presentations and no audience exchange. This style of conference production was similar to other events I’ve attended over the years in Europe, where a didactic approach dominates. It was an intense experience, not unwelcoming, but also not all that conducive to learning, at least for me.

Smaller events on other stages, including The Kitchen Stage, offered more human experiences—both for learning and inquiring through demonstrations, tastings and other ways to physically engage with food.

The highlight of my time in Stockholm was a cocktail hour co-production between Food Forever and Chefs’ Manifesto. Food Forever’s contribution to the agriculture and food movement is on retaining—and expanding—animal and plant biodiversity. This event brought together more than a dozen chefs from around the world to cook dishes that capture what the future of food could taste like by embracing, as they describe, “some of the weird and wonderful foods currently on the margins of the culinary mainstream.” The flavors and messaging hit home with an agriculture message and vision that were delightful embodiments of how food can fix it.

It’s gutsy to call a food conference “Blood n’Guts,” particularly when it’s not a symposium about meat, fish or any other subject where blood is a part. It’s a provocation that is likely the point of the founders, Ana Músico e Paulo Barata, Portuguese journalists who have assumed a leadership role in instigating Portuguese food advocacy.

While I attended only part of the conference I enjoyed listening to a mixture of local and international speakers. Unlike in Stockholm, where the entirety of proceedings took place in English, presentations at Sangue na Guelra were native to the speakers with simultaneous translation offered from and to other languages including English, Spanish and Portuguese. A welcoming gesture acknowledging cultural diversity.

The voices brought a variety of topics to Lisbon. There was academic discourse on 100 years of Spanish foods, its influences, and movement towards becoming an independent cuisine; Canadian-born Berlin resident Arlene Stein of Terroir Talks gave an enthusiastic call to action for culinary diplomacy—using cuisine to bridge culture, build cross-culture understanding and bridge social and political divides.

And then there was the “chef session” — a mainstage panel discussion that featured four of Portugal’s top (and all-male) chefs around the topic of sustainability. The organizers’ definition of this term turned out to be quite different from what the chefs are focusing on, and about which they wanted to speak. And that is, financial sustainability—building and operating restaurants that will thrive for the long-term, be good employers, and create lasting impressions among diners.

This made sense to me and is a prudent take on sustainability because without financial sustainability other components cannot be pursued, or, if they are, are likely to falter. It also makes sense in the context of Europe’s recovery from the 2008 economic crisis. Portugal, like Greece, was among the hardest hit. Unlike Greece, Portugal took a high road to economic recovery: borrowing money for a big tourism play. Officials believed that the country’s inherent beauty — its weather, culture of hospitality, wine, food and amazing beaches — was a smart investment. They seem to be right. Portugal has been an “it” country to visit over the last five-plus years.

As people began traveling (and investing) in Portugal, native chefs who’d left to study and work abroad, mostly throughout Europe, were enticed to come back. Lured by a growing tourism economy, offers of investment, and an international spotlight now on their home country, they wanted to return to cook.

And so this panel of five chefs, the first generation of Portuguese cooks to gain international attention and become ambassadors of their native cuisines, essentially feel like they are doing something notable and important and take great pride in the local economies they are creating with their culinary talent and hospitality approach.

On one hand, these are arguments difficult to challenge, but from the front row, rather spontaneously, Paulo instigated a dialogue with the chefs, peppering with challenges relating to how they can—and perhaps should—do more, using their public platforms, their “star power” to push an agriculture and policy agenda in Portugal.

He pressed hard, presenting a kitchen sink of issues that have long been worked on in a host of other European countries, the U.S. and elsewhere, but are indeed new in Portugal: school meals, local food production and distribution, the cost of food, and the rising health issues related to processed food.

The chefs, to their credit, acknowledged all and that much needs to be done to raise the bar for agriculture and food outside of the high-end restaurant domain (which should sound very familiar to our readers). They also held their ground; this notoriety is new, the rising real estate costs mean their staff can’t live in Lisbon any longer, they need to focus on financial sustainability first. They can’t do it all, but they are willing to do more, as they are able.

The provocation got things said aloud, perhaps for the first time. As it was happening I reflected on the fact that, after all, Portugal is a new democracy, just 45 years since a long and brutal dictatorship ruled the land and its people. As I have recently learned, trusting people outside of one’s family and tight circle, is a slow process. The chefs referred to open discourse as “a spirit of association [that] doesn’t exist in Portugal.”

Nothing was resolved, but I left this session moved to become part of the conversation, hopeful that having helped to chart the course of the food movement in the U.S., I have as much to offer as I have to learn.

Each of these two events were both quite European but so different from one another. EAT functions at the grandest level possible, offering a prescription (if not a detailed strategy or plan) for planetary and human health in challenging times. It’s a Northern European post-industrialist position borne out of wealth and social cohesion. Sangue na Guerla’s proposal is much more humble, but no less grand or challenging. They are calling on Portugal to take advantage of this moment where chefs and cuisine have the spotlight and use it to develop a grassroots agenda to shape the future of agriculture, food, health, community and culture.

The symbolism of this discourse taking place in the shadows of the 25 de April bridge, the Golden Gate of Portugal, that honors Portugal’s independence and freedom of movement was not lost on me. The 1974 revolution is famous ending fascism in Portugal with barely any violence. I think Sangue na Gueria’s goal is to build on that style of revolution to bring Portugal in line with countries who’ve had time to work on these issues longer, with a particular Portuguese flavor. They still believe—and I think I might agree—that it still takes people to fix food.