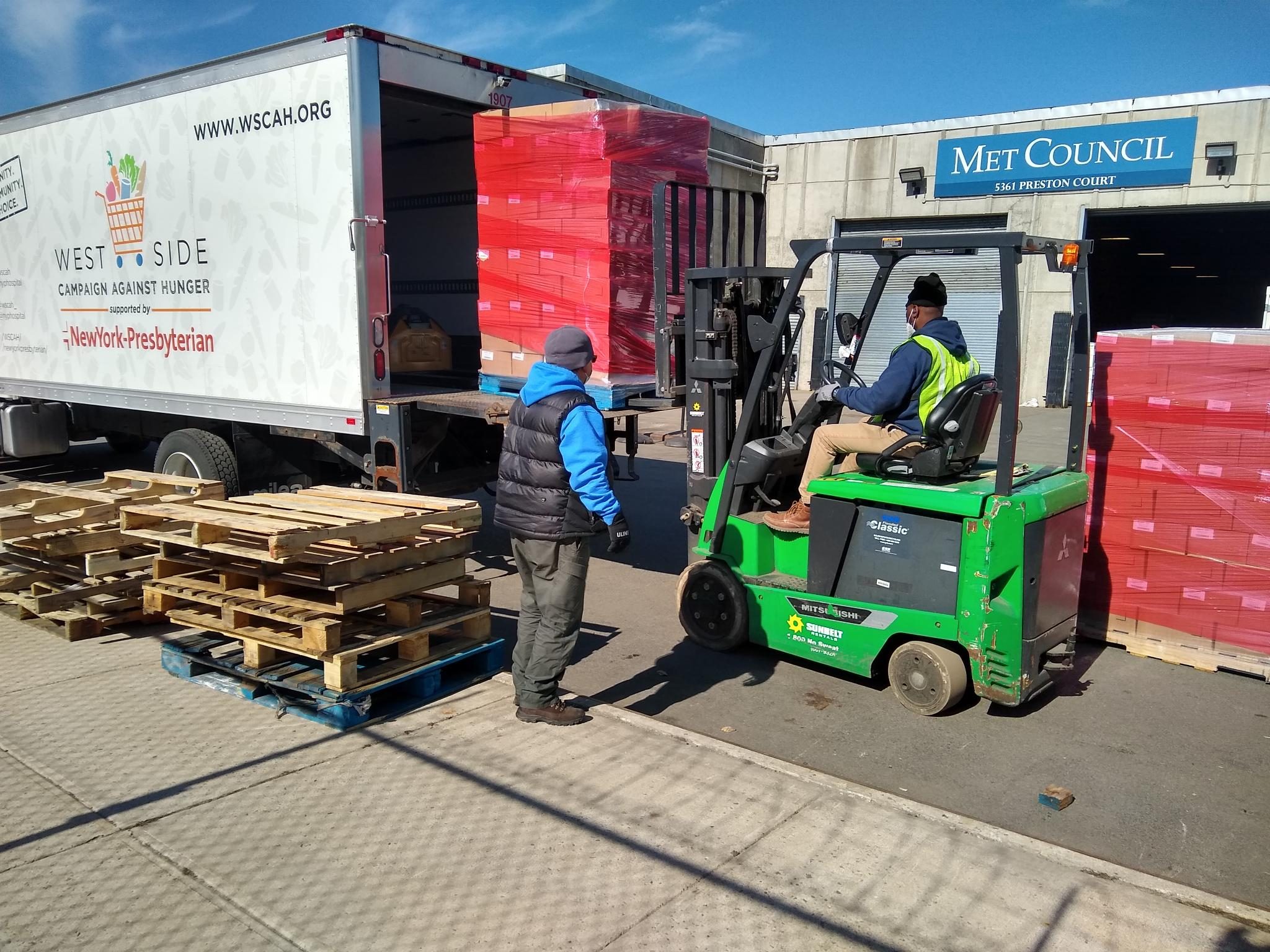 Founded in 2018, the Roundtable: Allies for Food Access began as an organizing effort among a coalition of four of NYC’s largest emergency food providers and pantries. The effort was conceived and spearheaded by the West Side Campaign Against Hunger (WSCAH) and included additional founding members New York Common Pantry (NYCP), Project Hospitality (PH), St. John’s Bread & Life (SJBL).

This partnership came together with the expressed goals of identifying opportunities for better prices and better food through strategic purchasing and cooperation, as well as creating space for information sharing and community building across organizations within New York City’s emergency food distribution network. Now in its fourth year, the Roundtable has added four additional members to the group – the Metropolitan Council on Jewish Poverty (Met Council), Holy Apostles Soup Kitchen (HASK), Part of the Solution (POTS), and The Campaign Against Hunger – while also working less formally with a number of other emergency food providers and pantries across the five boroughs.

During this time, and with the pandemic pushing demand for food relief to a fever pitch citywide, the group gained extensive experience sharing critical information across coalition members with a transparency rarely seen in a system that has historically forced them to compete with one another for resources. With KK&P’s assistance, the Roundtable successfully worked to translate this cooperation into a sophisticated invoicing and price tracking operation that helps to make sure each organization is aware of the best prices available for the goods their clients need and want, keeps existing vendors honest, vets new vendors for the group, and has, to date, successfully helped Roundtable members realize significant savings on goods they depend upon.

Getting to a Pilot: The Road to Yes

For all of this significant and groundbreaking cooperation and progress, there was one particular goal that had, until this past February, eluded the group’s efforts – a genuine collective purchase of food from a vendor. After all, the notion of a collective purchase sounds like a relatively straightforward thing to do, right? Pool resources and purchase a trailer of food direct from a manufacturer at discount pricing (hopefully), and distribute across the group and to clients – 1, 2, 3, and done, right?

Not for lack of trying, the reasons for the delay in executing this milestone were complex. For starters, we had to find and agree on a single item which all of the Roundtable member organizations wanted enough quantities of to warrant ordering a full trailer load of product (26 pallets) in one go. This may sound like a basic step but it was not a simple task. Keep in mind that each organization serves different communities with different tastes and needs, and there are wide variations in size and distribution volume that each organization works within. It was essential to all Roundtable members that we select an item that clients would actually want and appreciate, across cultures, family sizes, and housing circumstances.

Next, we had to consider the actual logistics of placing and receiving the order, including the storage capacity and constraints of each organization, as well as confirming we had a site with a loading dock and lift capable of receiving the trailer itself, and the ability to pick up or deliver each organization’s allotment from that receiving location. You can only buy a trailer full of fresh milk if you have the ability to refrigerate it until you can run through it, after all, and with some organizations working out of church basements, others forced to receive and break down pallets of product on the sidewalk, and impolitely located flights of stairs seemingly everywhere, it can’t be overstated the extent to which physical constraints and infrastructure dominated our thinking as a group. We also had to figure out how, exactly, we were going to actually place and pay for the order, with these functions typically spread across the ordering and billing departments of each of the individual member organizations.

With all of these thorny issues in the mix, there still existed the problem of conducting the actual pricing research to make sure that the Roundtable was getting a good enough deal to warrant all of this effort in addition to soliciting bids from potential vendors, explaining the unique circumstances we were working under, and negotiating logistics and payment terms in that context. It should suffice to say, this ‘basic step’ portion of the Roundtable project quickly became one of the most complex and demanding lifts on our docket.

After months of discussion, brainstorming, negotiation, research, vetting, and troubleshooting, six of the eight Roundtable members agreed to take part in the pilot.

Following a rigorous pricing analysis and bidding process with potential vendors, the decision was made: the Roundtable would order a full trailer of quick oats – 26 pallets worth, weighing more than 37,000 lbs. in nearly 43,000 14oz. packages – direct from a manufacturer, and secured pricing that was less than half of what traditional wholesalers were offering. We also determined that we would receive the order at Met Council’s warehouse in Brooklyn before distributing across the group, with Met Council very generously offering to act as a home base for the project while also providing much needed warehouse facilities and a significant amount of time from their operations and warehouse staff.

With the consent of the Roundtable membership secured, product identified, vendor selected, and Met Council stepping up to host, we turned to nailing down ordering and payment details within the two-week window on our price quote from the vendor (they could only offer a two-week guarantee due to instability in global commodities markets).

Pushing as hard as we could as a group, we placed the order officially in the last week of January, and were told to expect our oats to be delivered the second week of February, leaving Met Council and the rest of the group ample time to sort out logistics and distribution before Met Council had to begin cleaning out their warehouse of grains to render it kosher for Passover, preparations for which were set to begin the first week of March.

In the intervening weeks, and as our delivery date approached, Met Council staff worked quickly with KK&P support to organize everyone who would be able to pick-up their orders and those who would need deliveries. Met Council assigned everyone a pick-up or delivery window and integrated those assignments into their existing warehouse operations schedules and trucking routes.

However, with just a few days left before our delivery date, literally the Friday before our Tuesday delivery window, I received an urgent call from our vendor: Max, I have the oats, but the poly-wrap to bag them is stuck in Canada behind the trucker blockade. All my other suppliers are tapped out. I’m going to try to air freight it in if I can’t find a domestic supply. The order is going to be delayed. I’ll call you back on Monday. And so, with Passover fast approaching, I and my Met Council counterparts scrambled to notify Roundtable members of the delay, considered our options for alternative receiving sites if the oats arrived close enough to the holiday that they couldn’t be received or stored at Met Council’s warehouse, and attempted to conjure the serenity to accept the things we cannot change!

In the end, our vendor was able to get the poly-wrap he needed just a little over a week later (he never told us from where, we didn’t ask), and rushed the order to Met Council’s warehouse, dropping off just a few hours before sundown on Friday, February 25th, and less than a week before Passover prep was set to begin. Rallying to support one another and execute the plans laid two weeks earlier, and with real-time coordination by Met Council’s warehouse and trucking staff, the participating Roundtable organizations sprinted to pick up their oats allotments and prepare for deliveries. When it was all said and done, all five pick-ups and deliveries were completed by the end of the day on Friday, March 1st, clearing the way for Met Council to turn its warehouse over to Passover preparations.

Just a few weeks later, with payments and billing underway, representatives from the six organizations that participated in the pilot order sat down to debrief the experience and discuss next steps. Crucially, everyone was pleased with the high quality of the oats that came in, and most of the organizations had already run through their allotments. The organizations also came away with glowing reviews of one another’s staff and expressed an excitement about opportunities to coordinate more closely going forward.

As we look towards the future of the program, the Roundtable members are in agreement that they are ready – as a group – to begin setting up standing orders for additional staple goods on behalf of their clients, such as shelf-stable milk, peanut butter, cooking oil, and diapers. They are setting themselves – with KK&P’s support – on the path to capitalizing on their shared experiences of cooperation. We are excited to continue to develop this capacity with and for the Roundtable’s member organizations, and to help them continue to advocate and provide for the well-being and dignity of all New Yorkers.